With echoes of the early nineties ringing in their ears and Nirvana, the Pet Shop Boys and Vanilla Ice still playing out on their car cassette players, the team from Charles Lawrence Surfaces returned to Gloucester to revisit and reconstruct two of their original installations of 1990 and 1993.

Plock Court was originally constructed as a full size sand filled pitch and was, at the time, sited in a fairly lonely set of playing fields set within a flood plain. Today the site is a hive of activity, being developed over the years with the addition of the Oxstalls Tennis Centre boasting first class facilities for indoor and outdoor tennis as well as coaching and classes for all levels.

The old pitch surface was removed along with the original "Polymac" shockpad. Following renewing of the original kerbs the pitch received a layer of macadam installed by our in house civil engineering division, Woodholme Construction. The facility was further enhanced by a new fencing system and alterations to the floodlights providing more modern lamp units and additional flexibility to the switching options.

The synthetic system chosen was a new 15mm shockpad overlaid with a Lano Revolution sand dressed carpet which will continue the venues fine reputation well into the future.

At the same time we were also pleased to return to Blackbridge Athletics Track, sited across town from Oxstalls. Charles Lawrence Surfaces originally converted this facility from a rather neglected cinder track to a porous synthetic facility back in 1993. Following a successful competitive tender we returned this year to remove and replace the existing synthetic surface The opportunity was taken to upgrade the home straight to a full 8 lane facility, as well as moving the horizontal jumps and adding a state of the art floodlighting system. The site was finally given a new bespoke entrance and car park which will further reinforce the stature of the club and facility.

Many thanks to all those at Gloucester and we look forward to returning in about 2025! 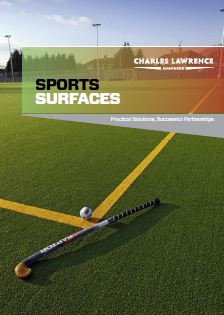